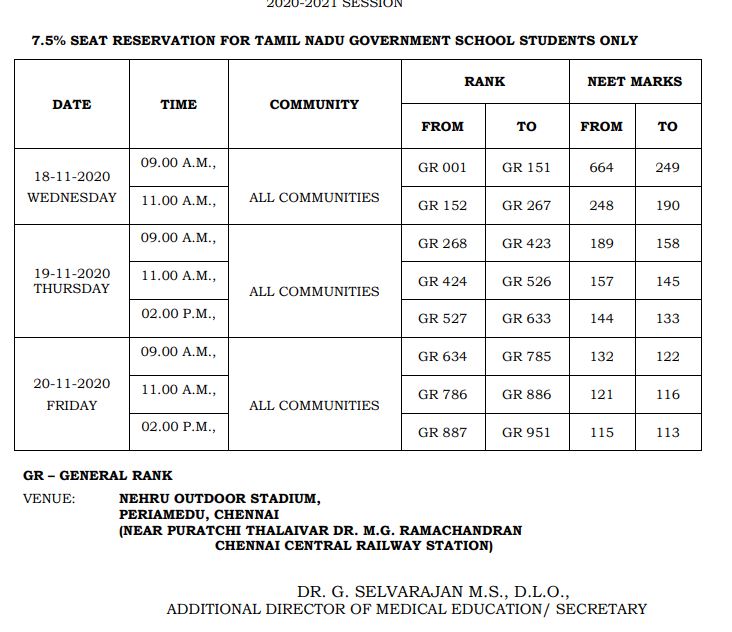 Counselling for MBBS and BDS seats in Tamil Nadu will begin on 18/11/2020 with the first session being devoted to special categories followed by seats reserved for government school students, Health Minister Doctor C. Vijayabaskar said on Today

The State will have 2,085 MBBS seats and 153 in BDS after surrendering to All India Quota, including the wards of ESIC and Indian Road Transport Corporation (548+70) in MBBS and 29 in BDS.

The Directorate of Medical Education has set aside 80 seats for persons with disabilities under the 5% reservation category. A total of 412 seats have been reserved for sportspersons and 448 seats for wards of ex-servicemen.

Toppers Srijan R, with a score of 710 in NEET, a student from Tiruppur, has topped the State merit list. Mohanaprabha Ravichandran (705) of Namakkal is ranked second while G. Swetha (701) from Chennai is ranked third.

Among government school students under the special reservation, Jeevithkumar R of Theni district, is ranked first. He had scored 664 in NEET. Anbarasab S, with a score of 646 from Kallakurichi and Dhivyadharshini S with a score of 620 from Chennai, are ranked second and third. Gunasekaran R of Vellore, who has scored 562, is ranked fourth. He is an Adi Dravida student who studied at the Government Adi Dravidar Higher Secondary School in T.T. Mottur.

In the management category, the first two ranks have been bagged by students from Kerala. Jai Murhekar, a resident of Chennai, with a score of 691, is ranked third.

Dr. Vijayabaskar said the counselling was being conducted as an in-person procedure as the State wanted to scrutinise nativity claims and ensure only genuine candidates were given admission.

Several teams had been formed to scrutinize every certificate produced by the candidates, he said.